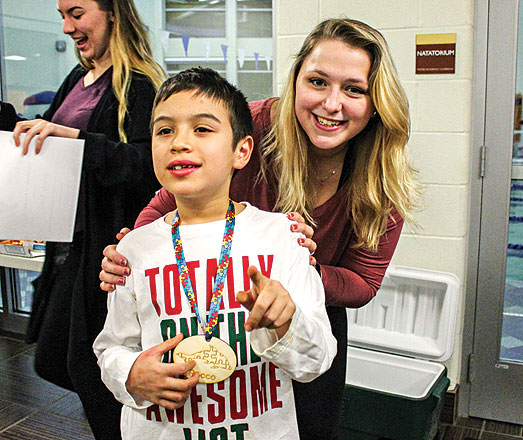 DOWNTOWN AKRON — The Autism Society of Greater Akron (ASGA) announced the inaugural class of 23 students who graduated from its Swimming with Autism class, a water safety program designed especially for individuals with autism.

“We want to congratulate all the graduates, instructors and parents who made up this first class,” said Lisa Thompson, director of ASGA programs. “The progress the students made surpassed all of our expectations and planning. Mission accomplished.”

According to ASGA officials, students ranging in age from 4 to 24 made up the graduating class and locally resided from Akron, Copley, Cuyahoga Falls, Fairlawn, Medina and New Franklin.

Leah Padilla, of Fairlawn, whose 5-year-old daughter, Kristina, took part in the class, said the class helped her daughter in many ways.

“Kristina was medically diagnosed with moderate to severe autism when she was 4 years old and does not understand danger and will often bolt or wander,” she said. “When I read the Autism Society’s brochure about the program, I was struck by the statistic that children with autism are 160 times more likely to drown than the general population. With this program, Kristina has gone from primarily requesting ‘school bus’ because she loves school, to requesting ‘swimming.’ She has made incredible gains not only with water safety, but also in areas we didn’t expect, such as identifying people by name, joint attention, waiting, listening and following directions …”

Kristina is shown above right with instructor Sierra Kosh.

Also shown at top with Kosh is Rocco Fini, of Fairlawn.

“We have worked for over three years to create a program that would fit the needs of our community,” said Laurie Cramer, executive director of the ASGA. “We couldn’t be happier with the results.”

The second class of the Swimming with Autism program will be in March and registration will open early next year, said ASGA officials. For more details, visit www.autismakron.org.